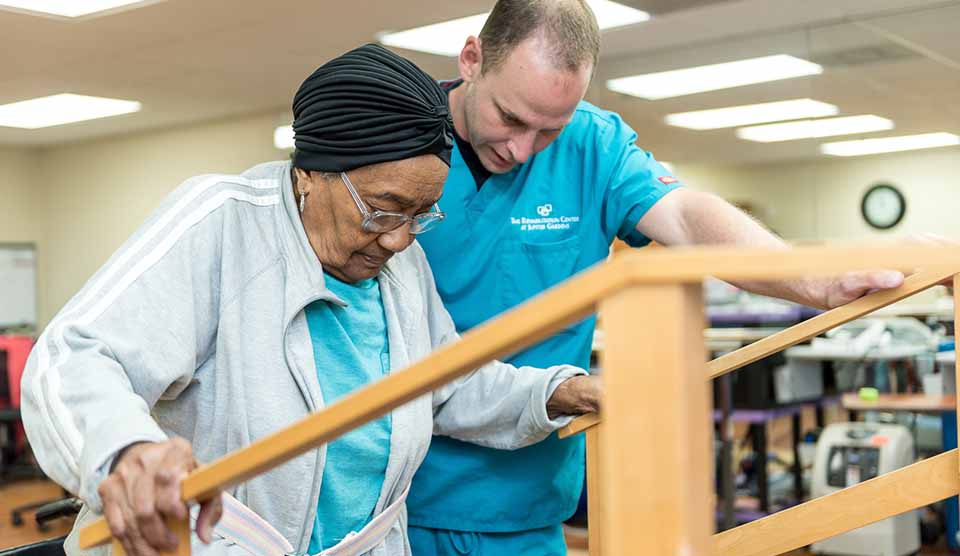 Ms. Judith Gibson arrived at Jupiter Rehabilitation and Healthcare Center on September 19, 2017 from Saint Mary’s Medical Center. Prior to her hospitalization, she resided at the Country Residence, a small assisted living center with eight residents. Due to impending Hurricane Irma, Ms. Gibson was transferred to our community for continued care.

Ms. Gibson had developed a diagnosis of altered mental status prior to arriving to our community. She was admitted to the hospital where she received specialized treatment for her diagnosis; Ms. Gibson was treated for three days as an inpatient. The hospital clinical team recommended that Ms. Gibson seek out continued care at a neighboring skilled nursing facility where she could receive physical and occupational therapy for strength building. Ms. Gibson and her close friend, Fey West, selected Jupiter Rehabilitation and Healthcare Center for their incredible reputation and quality of care.

Upon admission, Ms. Gibson was evaluated by occupational, physical and speech therapy. Our speech pathologist determined she was not at risk and was not in need for services; however, both occupational and physical therapy determined that she was in need of support for functional mobility and enhanced independence. To determine Ms. Gibson’s goals, Fey shared with the interdisciplinary team her current status for performing activities of daily living. The team intended to ensure that Ms. Gibson had goals set in place that would be of her best benefit, comparing her functional baseline with her progression. A main therapeutic goal for Ms. Gibson was to facilitate a healthy state that would allow her to return to her assisted living center.

Jupiter Rehabilitation and Healthcare Center is proud of Ms. Gibson’s progress. She is now prepared to return home after only ten days of therapy! Ms. Gibson is also excited to reunite with her many back home. Even with the stress of the storm, Ms Gibson was able to put that aside and focus on getting better so that she could return home!