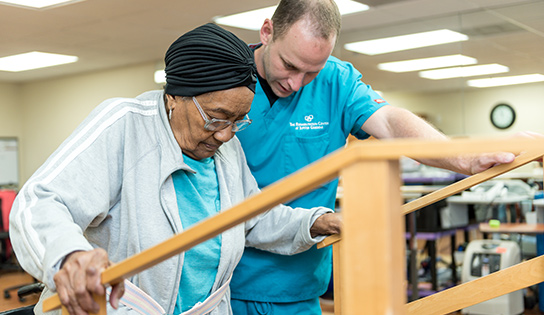 Details of experience:
Brooks S., unfortunately, returned to us shortly after he was discharged home in March. After he returned home he was very happy and succeeding in his independence. After about a week he shared that he began to feel ill and was unaware as to what could have been causing his fatigue and weakness. Brooks then collapsed in his bathroom and his wife quickly called 911 to rush him to the nearest hospital.

Brooks was taken to Palm Beach Medical Center on April 3, 2020. Upon arrival, they discovered that he was extremely dehydrated and was hyponatremic (his sodium levels were low). He was admitted and kept there until April 6, 2020, once they were able to stabilize his sodium levels.

He arrived back here at Jupiter Rehabilitation on April 7, 2020. Our team was so surprised to see him and welcomed him with open arms. The team began building a comprehensive care plan based on his clinical notes from the hospital. The team implemented an educational protocol to continue advising Brooks of proper hydration and ensured labs to ensure that his levels would remain at optimal levels.

He required detailed training in both physical and occupational therapy to support his activities of daily living. Brooks also required significant levels of strength building to return him to his health when he first discharged. Even though he was only home for a short time, his physical capabilities and stamina had decreased significantly due to being immobile.

Our therapy team worked alongside Brooks to support his breathing, standing balance, and mobility around a simulated home-like environment. He made great progress, as the team expected upon admission, and was beginning to plan his return back home. He enjoyed conversations with his current and former roommate, who had grown to be very fond of. The positive environment greatly contributed to his ability to build upon his foundations and progress rather quickly.

Our social services team connected with Brooks and his wife throughout his stay and was proud to finally schedule his anticipated discharge and return home. Brooks discharged from our community on May 24th stronger and more confident than he had been since his last visit with us here at Jupiter Rehabilitation. Educational resources on nutrition and hydration were also provided to prevent any opportunity for dehydration once returning home, especially during the month of May here in South Florida. We wish Brooks the very best of health and happiness and are so proud of the progress he has made with us here in our community.